Anxiety is a condition whose side effects can, in the long term, ultimately lead to physical collapse. While severe anxiety attacks can cause the sensation that you are about to faint or pass out, it is actually quite rare that anyone does: it is far more likely when you have had long-term, persistent anxiety that does not abate (which usually accompanies conditions such as psychosis, but can also be a result of a very stressful lifestyle and a lack of coping mechanisms).

This article will talk about the symptoms and side effects of anxiety than can lead to collapse over the long term, as well as discussing some coping mechanisms to help you ease your anxiety before it causes physical collapse.

Anxiety Symptoms That Drain the Body

Anxiety very, very rarely causes fainting. It can, because anxiety causes hyperventilation and muscle weakness, and in some cases how you react to that (like holding your breath) can cause you to collapse.

What anxiety does do is cause many symptoms that overwhelm the body and cause it to feel like giving out. These symptoms include:

As you can see, none of these symptoms appear to lead to collapsing or fainting directly. But they do create an experience that can sometimes feel like the need to collapse. You may even sit down, or feel yourself so frightened and weak in an anxiety attack that you feel you have to lay down immediately. But they do not tend to lead to true "passing out" that most people expect when they think of collapsing.

How to Keep Your Anxiety Under Control

In order to prevent this feeling of collapse you absolutely have to keep your anxiety under control. There are many different methods for safely, naturally, and inexpensively keeping your anxiety symptoms from draining you to the point of collapse. Some examples of these include:

Not collapsing from anxiety often has more to do with your mindset than your physical symptoms, since your mind is what determines whether your symptoms continue for the length of time it requires to lead to collapse. While during an attack you may feel like collapsing, think of it as your body reminding you what could happen in the long term if you don't take steps to address the problem.

Fear is often self-sustaining. When you have anxiety, and something... 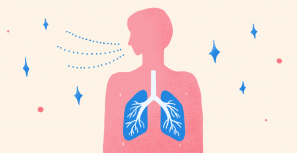 How to Cope With Anxiety Breathing Difficulties

How Anxiety Can Cause Drooling/Spitting

Can Anxiety Cause a Fever?

How Anxiety Can Impair Communication

Most people think of anxiety solely as a mental health...
2.7k