Hypochondriasis - or as it is now referred to as "illness anxiety disorder" - is a type of anxiety that is often misunderstood. It goes by many casual names, the most common being "hypochondria" or "health anxiety." It comes in many different types, in terms of how people think about that health anxiety and the symptoms it causes. In this article, we'll introduce hypochondriasis and discuss some of the ways to treat it.

How to Understand Hypochondria

The reality is that it really should be broken out into types. The following represent some of the "types" of hypochondriasis but note that these aren't medical or psychological terms, but rather a way to break down examples of what people experience.

Those that refer to the casual, layman, and media influenced idea of hypochondria focus on this idea of hysteria. For example, a person may watch a news report about a deadly virus and immediately think that they have that virus.

This type of hypochondriasis seems to happen to all types of people - not only those with anxiety - and it's not necessarily the most common type of hypochondria in terms of those that need psychological intervention. The problem here is one of placebo. People start to feel the way that they expect to feel if they had a disorder, or worry that they may have it simply because they expect to have it.

It has a lot in common with the next type of hypochondriasis, but it should be noted that it is certainly not the only type. Many others with health anxiety deal with many other problems, including real symptoms and more.

Directly related to the previous type but deserving of its own section is psychosomatic hypochondria. Psychosomatic is when your mind actually creates or causes you to feel the symptoms even though nothing is there to cause them. It's similar, in that you may find out about a disorder or health problem and then start to experience symptoms, only to believe that you then have that health problem.

The symptoms are not imagined or being faked. Rather, the idea is that the mind genuinely starts to "feel" the symptoms even though they're not present. In some cases, the mind may genuinely create it - feeling pain where there wasn't pain because it expects pain to be there. In other cases, the symptom is there, but is caused by something harmless and is being misinterpreted by the brain.

Often this is because anxiety itself - especially panic attacks - can cause so many different symptoms that the body really does experience the symptom, but it's from anxiety and not from a health disorder. Then the mind essentially processes that information under the belief that you have that health problem.

For people with this issue, the issue can be compounded by a variety of other problems:

This type of reaction is also tough to control because it's a problem with uncontrollable reactions. The person doesn't want to feel this way and often knows that it's probably wrong, but they cannot help it. It takes a great deal of behavioral training to learn your way out of this response.

The other way that some people experience hypochondriasis is to experience the symptoms first and the specific fears second. For example, a person might feel a weird pain in their back, try to find out what it is - often through search engines - only to find warning articles about how back pain may be a sign of kidney failure.

This can be a severe issue for some people, and why Googling symptoms is so dangerous. It's also a serious problem for those with an anxiety disorder since many of the least well-known anxiety symptoms are nearly identical to disorders such as multiple sclerosis and heart disease, despite anxiety being far more common. Often you'll find that the weird symptoms you're experiencing from anxiety (or simply normal discomforts of aging and diet) are linked to terrible conditions, and those with hypochondria often fear they may have those conditions.

Remember, none of these are official types, and many people experience a combination of all of these. But at the very least it will make the idea of hypochondria easier to understand.

Health Anxiety as a Symptom of Anxiety disorder

One thing to also realize is that some forms of health anxiety aren't their own separate forms of anxiety at all. They're actually symptoms of other anxiety disorders.

All anxiety can cause the development of health anxiety. General anxiety disorder is often linked to hypochondriasis. Obsessive-compulsive disorder is too. But with panic disorder, that health anxiety may also be its own specific symptom. Panic disorder causes a number of different physical symptoms that are all very real, causing people to experience enough symptoms that they start to develop health fears.

Furthermore, panic attacks can cause symptoms even while no anxiety is present, and also causes what's known as "hypersensitivity" - which means that your mind notices any small change more and experiences it as if it were a health reaction.

These are all the reasons that hypochondria can be very difficult to control, and why some anxiety disorders tend to make it worse - and may even create it.

How to Stop Health Anxiety

The first step is to always see the doctor and get a complete checkup. Health fears are health fears, and you shouldn't ever leave your health to chance. But you should also be aware that seeing a doctor will almost never stop these health worries, nor will it even help your anxiety. In fact, in some cases seeing a doctor can actually make your anxiety worse. It's still worth going, but never assume that going to the doctor is going to stop it.

So what else can you do? Living a healthy lifestyle is actually the first step. Diet and exercise aren't necessarily going to stop your anxiety, but they'll reduce some of the minor aches, pains, and discomforts in life that can trigger bouts of hypochondria. You should also consider the following:

Of course, these are only the first few steps. In the end, you're still going to need to address your anxiety and make sure that you're actively focused on calming yourself and your anxious thoughts.

Spiders are just about as unlike humans as it is...
266
Social Anxiety 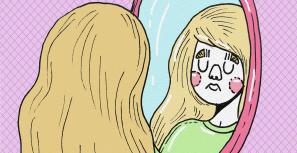