Anxiety Can Make You See Spots!

Not all symptoms of anxiety are obvious. There are several symptoms that are unusual enough that most people convince themselves they're caused by something other than their anxiety - some type of more serious health problem that requires a doctor's attention. One example is seeing spots.

The only way to diagnose any visual spots you have is by seeing a doctor, so always make a doctor's appointment if you have any concerns. But in some cases, anxiety really can make you see spots, and can make the act of seeing spots cause more anxiety.

Anxiety can genuinely change your vision in a way that can be stressful, especially if you're not expecting it. It may do so in many different ways - ways that will be explored in this article. But the key to understanding vision problems isn't to worry about the vision itself. The key is to make peace with your anxiety.

Different Types of Visual Symptoms that are Associated with Anxiety

"Spots" is not a very clear term, and the idea of having visual spots invokes fear in a lot of people. Perhaps this is because on television and in movies, "seeing spots" occurs when someone is poisoned or about to pass out.

One of the problems though is that people describe these spots differently, and may be talking about different problems when referring to how they see spots.

People with anxiety report seeing spots when they are anxious. One type of "spot" that people might see is visual snow. Visual snow is described as tiny flickering dots that resemble the static that can be seen on a television.

Visual noise can cause a great deal of fear in people, because one of the first things you notice on its Wikipedia page is that visual snow can be caused by Multiple Sclerosis, or MS. MS is one of the major fears of those with panic attacks and severe anxiety, since so many of the same symptoms are linked to multiple sclerosis.

It's impossible to rule out an MS diagnosis without first seeing a doctor. But you should note that MS is a rare disease, and one that doesn't usually manifest itself in minor symptoms. So while it's conceivably possible that those with visual snow have MS, it's also highly unlikely.

This means that it is entirely possible that anxiety itself might be the cause of the visual snow. If you are seeing visual snow, you should go see doctor to see what is causing it. If the cause is migraines or anxiety, both can be treated.

It is known that the adrenaline rush that occurs during the activation of your fight or flight system can cause a person to have tunnel vision. This is an experience in which your eyes focus on something in front of you and the rest of the world is blurred out. The purpose of tunnel vision is to help a person focus on and adapt to a threat in their environment.

Floaters are not caused by anxiety, but they can cause a person to worry about their eyes and become anxious. In other words, they are a cause of anxiety.

For the most part, floaters are a normal consequence of aging, and there is no need to worry about them. Your eyes are filled with a substance called “vitreous” that fills your eyes and helps them maintain their shape.

As you age, the vitreous in your eyes begins to liquefy. As the vitreous liquifies, collagen fibers begin to appear in your vitreous, and they cast shadows on your retina. These shadows are experienced as floaters. In other words, floaters are more often than not a part of the normal aging process, and there is no need to take action.

However, sometimes floaters are an indication of a more serious problem. If you experience a sudden increase in the number of floaters, or if the floaters are accompanied by flashes of light, or the descent of a curtain over your visual field, then you want to go see an eye doctor right away. These additional symptoms might mean that you have a retinal tear or a retinal detachment, and both of these conditions require immediate medical care.

However, if there is no dramatic increase in the number of floaters you see, and if you are not seeing flashing lights or a visual curtain, then your floaters are probably just the result of a normal aging process. There is no need to worry.

If you find yourself worrying and becoming anxious about floaters that are part of the normal aging process, then you might want to see professional help to deal with your worry and anxiety.

How to Cope with Visual Problems Related to Anxiety

If you are unable to dissolve your anxiety on your own, then it would be helpful to seek help from a therapist.

Can Anxiety Cause Blurred Vision?

It's amazing all of the ways that anxiety can affect...

4 Ways to Prevent Pins and Needles From Anxiety 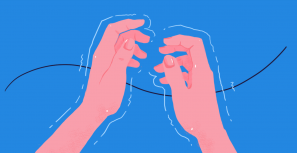 Does Anxiety Cause a Metallic Taste in Your Mouth?

Anxiety and Numbness - A Typical Reaction

Anxiety and the Chills - The Cause and Connection

Sweating is the body's natural way of staying cool. You're...
2.2k
Sensations

Anxiety Fatigue and How it Affects Modern Living