How to Stop Obsessive Thoughts and Anxiety

Persistent and negative thoughts are one of the most common signs of an anxiety disorder. Anxiety makes it nearly impossible to stop focusing on things that you don't want to think about. These thoughts are rarely positive, often related to your fears or distressing emotions, and in many cases, the existence of the thought causes further anxiety and often leads to more obsessions.

Obsessive thoughts are the hallmark of obsessive compulsive disorder, but there are types of "obsessive" thoughts that are present in a variety of anxiety disorders that won't necessarily cause a diagnosis of OCD. Below, we'll look at examples of these obsessive thoughts and how they affect you.

All Types of Anxiety Can Lead to Obsessive Thoughts

The idea of "obsession" is that you cannot focus on anything other than a specific issue (or a few issues), and no matter how hard you try you cannot distract yourself. Many people who don’t have anxiety disorders still experience such thoughts. For example, your first crush back in high school may have led to obsessive thoughts at the time, if their affection was all you could think about.

But when these thoughts are negative or cause you anxiety/stress, then it's highly likely you have an anxiety disorder.

Obsessive thoughts are required for someone to be diagnosed with obsessive compulsive disorder. These obsessive thoughts are often violent, sexual, or fearful in nature. The thought may change depending on the situation (more on that in a moment), but once they've entered your mind, you'll often do anything you can to get rid of them.

Some examples of obsessive thoughts include:

Notice that some of these are obviously far more distressing than others. There are those that have unwanted fantasies about murder or rape, while others may simply constantly fear they haven't turned off the stove. But one thing they all have in common is that they cause significant distress, and once the thought enters a person's mind, it becomes difficult to shake without some type of action.

Those that are concerned about doing something violent or sexual may try out any habit that causes the intensity of the thoughts to decrease - most often, however, the person performs safe and acceptable routines or rituals - not necessarily the violent or sexual act itself! In OCD, these obsessions are simply unwanted thoughts - they are highly unlikely to be acted upon.

It's crucial to remember that anxiety genuinely causes these negative thoughts and negative thinking. The way that anxiety alters your brain chemistry makes it very hard to focus on the positives or the future, and so it's not your fault that you can't distract yourself from these thoughts or that you're having them at all.

The More You Try To Stop Them

Numerous scientific studies have shown that trying too hard to "not" think about something may actually cause you to think about it more. That's because when you focus on avoiding a thought, you’re reminding your brain that the thought exists at all, rather than simply forgetting about it and moving on. It's a strange way that the brain works, making it very hard for someone that wants to end their obsessive thoughts to actually take control.

This represents a serious problem for those that deal with obsessive thoughts from OCD. If they experience too much shame or fear over these thoughts they'll try not to have them; and this will cause them to have the thoughts even more, leaving them trapped in a vicious cycle.

Obsessive Thoughts in Other Anxiety Disorders

It's also possible to develop obsessive thoughts associated with other anxiety disorders. Generally, these will not be quite as severe or overwhelming as the thoughts in OCD, and you're unlikely to develop compulsions as a result, but there are often some similarities between both disorders. Your psychologist will be the one to diagnose which of the following you have. Some examples of these disorders include:

So, while generally an obsessive thought is considered a problem for those with OCD, it is something that can affect those with other types of anxiety disorders as well.

How to Stop Obsessive Thoughts

You need to take a holistic approach to managing your anxiety. Don't just try to target the obsessive thoughts. Try to target your anxiety as a whole in order to properly address the way it affects you and to find ways of coping with future stresses. Here are some pointers:

First and foremost, you need to learn to accept your thoughts for what they are: a symptom of your anxiety or OCD. You need to stop shaming yourself, and stop feeling like you need to push these thoughts away.

Acceptance is crucial. These thoughts are not in your control, and not something you should expect to control. Learn to accept that they're a natural part of the disorder and that when you treat your disorder you'll have fewer of these thoughts.

Yes, it's something you'll need to cure, but while they're occurring, it's much like being sick with a cold. You don't get mad at yourself for sneezing, so you shouldn't try to fight your thoughts or see them as a bad part of your personality while you're still dealing with your disorder.This is obviously very hard for some people, and sometimes additional support from a therapist is necessary.

Sometimes you'll have a thought that is obsessive and persistent. Try writing those thoughts out in some type of journal or diary. Your mind may focus less on these distressing thoughts when you have an opportunity to process them differently by writing them out.

Get Used to the Anxiety

One of the hardest parts for those living with obsessive thoughts is the idea that they should just live with the anxiety. But learning to be okay with the anxiety is actually an effective strategy.

Part of this will come from acceptance, as mentioned above. But a big part of it is simply learning to let yourself worry.

Compulsions have a tendency to provide too quick a solution to the obsessions, causing you to avoid actually dealing with the anxiety. However, the compulsions actually strengthen the obsessive anxiety, because you’re depriving yourself of the opportunity to survive the anxiety and prove to yourself that this is possible. But if you fight the compulsions as best you can and let yourself be anxious for a while, you'll often find that the obsessions cause a bit less fear, because you know first-hand that nothing will come of them.

This often needs to be completed in the presence of a therapist who can teach you the tricks necessary to stop trying to solve your obsessive thoughts and simply let them be obsessive.

Cause Your Own Anxiety

Finally, another thing you can try with the approval of your therapist is the idea of causing the anxiety yourself - in other words, purposely think about the thing that causes you that much distress.

The idea behind this is called behavioral habituation. If you stop fighting the thought and start experiencing it as often as possible on purpose, the thought will eventually become less stressful (and possibly even boring).

If it's something you can do, like get your hands dirty, leave a light on, purposefully mess-up your apartment, etc., then you do it so that you get used to what the anxiety feels like and learn to fear the anxiety less. If it's something that you simply think to yourself, like distressing thoughts, then try to trigger these thoughts intentionally, until you accept that they have no real meaning and allow yourself to find them less irritating.

It's often best to do these in the presence of a professional, because this type of technique may not be right for everyone. Nevertheless, it's been shown that the more you grapply with and accept the anxieties, the easier they may be to handle.

Not All Obsessive Thoughts Are An Anxiety Disorder

One of the reasons that OCD and other anxiety disorders are so misunderstood is because many people claim that they have OCD or obsessive thoughts when they actually do not. You'll hear numerous celebrities, for example, that say that they have OCD because they like their food presented a certain way, or they dislike getting dirty.

Millions of people have these issues but do not otherwise have a psychological disorder. For your obsessive thoughts or compulsions to be part of an anxiety or obsessive-compulsive disorder, they need to happen frequently, to such a degree that they drastically impact on a person's quality of life. If you have the occasional obsessive thought or even a small compulsion or two that otherwise has little to no impact on your wellbeing, chances are you do not have OCD.

But if your obsessions are causing you significant distress, then it's very likely that you have anxiety and could benefit from some support.

The Overall Solution to Obsessive Thoughts

No matter what you do at home in your spare time, you will still need to address your anxiety directly. Remember, your disorder causes obsessive thoughts, so the only way to truly stop these thoughts is to stop the disorder.

Anxiety is a manageable condition, but it is important to find the right treatment. Some of the better options for obsessive thoughts out there include:

These are only a few of the many different options available for addressing obsessive thinking and anxiety, and as long as you seek out the one that works best for you, management is possible.

Anxiety and a Suicidal Mindset

Anxiety and Intrusive Thoughts: An Introduction

How Anxiety Causes All Types of Scary Thoughts

Anxiety isn't exactly a condition that is associated with positive...
1.3k 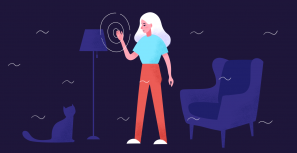