Anxiety drugs are prescribed to millions of individuals suffering from anxiety and stress. In this article, we will take a look at common anxiety drug side effects, and examine the reasons why anxiety medications are often not recommended.

Clumping all anxiety drugs together is misleading. Some have more side effects than others, just like some are stronger than others. Benzodiazepines can have some fairly pronounced side effects, while buspirone generally has fewer, but buspirone is also much weaker which is why most doctors prefer to prescribe benzodiazepines.

Even within the benzodiazepine class there are different side effects for different medications. But the most common side effects of anxiety medicines are as follows:

Both drugs may also cause what's known as "paradoxical effects," where in some cases the person may experience a worsening of symptoms rather than an improvement. In some, this may be more anxiety. In others, this can even be severe suicidal ideation and possibly even action. This is uncommon, but is still a serious concern.

Dangerous Side Effects of Anxiety Drugs

Beyond the paradoxical effect of suicidal ideation and increased anxiety, it is rare for these drugs to show signs of dangerous or fatal side effects. However, in a few rare cases, some people have experienced:

Most of these are related to SSRIs. Benzodiazepines may also cause what is known as ‘dependency’, which is when the body adapts to the anxiety drug. Dependency causes two issues. First, the medication will generally stop working , as the body gets used to the drug, which means that you will need to find a replacement medication.

Second, weaning off the drug incorrectly can lead to severe withdrawal symptoms. These withdrawal symptoms are not unlike withdrawing from severe alcoholism, and may lead to increased anxiety, depression, psychosis, seizures, hypersensitivity, and possibly suicide. Gastrointestinal problems and insomnia are also very common. Withdrawal can be extremely dangerous, which is why benzodiazepines often need to be slowly weaned off of over time.

While some anxiety drugs can cause some rare but severe side effects, they are generally well tolerated with few mild symptoms.

When you combine the side effect risks with the physiological and psychological dependence risk,it is recommended that anxiety medications are used only after a discussion with your doctor who will monitor you and any symptoms if they develop. If you do decide to commence medication, try to seek a talking therapy also, with the knowledge that medication is only a tool for recovery as opposed to the answer.

Those who live with anxiety every day know how important... 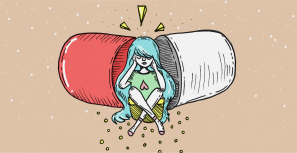 Anxiety is not generally something you want to treat with...
164
Drugs & Medications