Claustrophobia is a well-known anxiety problem. It's generally thought of as the fear of being in enclosed spaces. This is not just related to spaces that are small, but more generally to rooms which don’t have a clearly visible and accessible point of exit. Claustrophobia is often classified as a symptom of other anxiety disorders. However, if claustrophobia is your primary worry then you may be given a diagnosis of ‘situational specific phobia’ - the formal name for claustrophobia.

Claustrophobia is a distressing condition, and one that doesn't always have a clear cause. Recognizing your own thought processes and using them to control your anxiety is important if you want to rid yourself of claustrophobic anxiety.

Claustrophobia is linked to several different anxiety-related disorders, including:

Ultimately, we don’t know exactly how or why claustrophobia develops. Clearly, however, it’s related to other anxiety symptoms whilst also being a very particular phenomenon in and of itself.

Causes of Claustrophobia as its Own Problem

Traumatic experiences appear to play a role in some people's claustrophobia. Childhood experiences do as well - children left in a room by accident or punished by being placed in a closet are more at risk, which would indicate that for some people it develops as its own condition.

On the other hand, some may develop claustrophobia in the absence of any traumatic experiences. Phobias may also develop through social learning, where someone close to you (often a parent) experiences claustrophobia and you end up subconsciously adopting their behaviors and fears.

There are some that theorize that it's an evolutionary phobia, where being afraid of small spaces without an escape may have had some type of evolutionary benefit. For example, claustrophobia may be adaptive because enclosed spaces (and the conferred risk of suffocation or inability to escape, for example) are potentially dangerous in and of themselves. In our evolutionary history, this would have been a tremendous advantage. But now that we live in a safer world, it is less useful and may interfere with our ability to function from day to day.

Does the Cause Matter?

With so much time spent trying to determine the cause, it's important to remember that not all forms of anxiety have a clear cause, and the cause itself may not always matter. There are those that develop anxiety disorders for no apparent reason (indicating it may be genetically based) as well as those that develop them through a series of unrelated events.

For example, you can develop something like claustrophobia from completely unrelated events. If you had an anxiety attack at a party and then left the party in an elevator, your mind may associate the anxiety with the elevator even though your anxiety was caused by a party. Trying to determine the cause of the claustrophobia is often a difficult task.

But the good news is that the cause does not always matter. There is ample evidence that anxiety, no matter its cause, can be treated with the right anxiety reduction strategies. So those living with claustrophobia can address the condition (and the factors that cause it) with the right techniques and strategies.

How to Stop Claustrophobia and Anxiety

The treatment for claustrophobia is complicated because it generally involves experiencing a considerable amount of fear first and then learning to deal with that fear. It’s recommended that you undergo this process with the assistance of a trained health professional, such as a psychologist.

The abovementioned treatment approach is known as "exposure."

Studies have shown that humans have the innate ability to experience less anxiety when faced with something that causes fear for a long period of time. But that only works if you allow yourself to experience the fear until the fear goes away. If you avoid or "run away" from your fear, it causes what's known as "reinforcement."

Through this process, your mind is convinced that because you ran away, it must be something very scary that you are running from. It is almost as if your actions have an effect on how your mind sees the situation. Furthermore, by continually avoiding the fearful situation, you never get a chance to face the stressor and prove to yourself that you do in fact have the capacity to survive it.

This can be complex, so let's look at an example in the case of claustrophobia:

Let's use an elevator as an example. If you had a fear of elevators, and you walked inside one and felt anxiety, chances are you're going to want to leave right away. Yet, if you leave the elevator as fast as you can, you'll "reinforce" the fear. Why? In leaving, you are confirming to yourself the idea that elevators represent something which needs to be feared and avoided.

But if you stay in the elevator for an extended period, accepting the anxiety and controlling it (using various anxiety reduction techniques), you show your mind that it's okay - that elevators are not dangerous, and that you are not in any danger by being on it.

For those with severe claustrophobia, this is not easy to do. The process is known as "exposure therapy," and it is generally something you work towards slowly, rather than simply jump in an enclosed space and hope it all goes away. It takes time and practice, and the guidance of a trained professional may be required if your symptoms are severe.

You'll also need to control your overall anxiety and any anxiety disorders that may be linked to your claustrophobia. This is especially true if you're having panic attacks because these types of conditions are unlikely to go away on their own even if your claustrophobia is being managed.

If one were to simplify what anxiety is, it would... 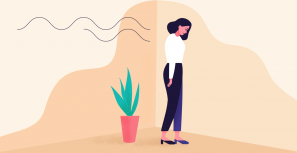 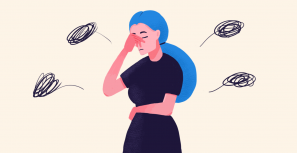 Cold feet may be the term for those that are...
227
Physical Symptoms